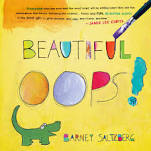 At the first gathering of students in my after school fabric arts class, I read the book, Beautiful Oops by Barney Saltzberg.  I told the kids that “oops” was going to happen in our class and one of my rules is that we wouldn’t be throwing projects out and beginning again.  I don’t think they really understood what I was telling them at the time.

Our first project involved weaving fabric into cardboard and then mixing our own paint colors to paint the cardboard. We will be adding some painting with 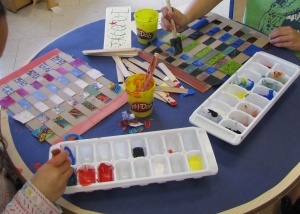 gadgets next week but that project just involved some work to figure out weaving and some thinking to mix colors.

The next project was school glue batik.  And the oopses really began to happen. One girl was making scallop-like lines across her fabric and then the lines became less regular and she turned to me and said, “I want to start over.”  I just put my hands up in an “oh well” type of message and said, “Remember I told you we wouldn’t be throwing things out to start over.  Figure out how to make your oops beautiful.” (And she did, here is the final result.) 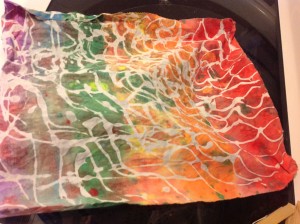 Another younger student was painting blue stripes carefully over the batik lines and then dipped the sponge brush into water to clean off some of the paint.  He didn’t realize how much water those brushes hold and when he put it down on the fabric, his blue went everywhere.  I could tell he was dismayed as he went and got a load of paper towels to stop the flow.  Shy by nature he wasn’t sure how to express his disappointment or ask for advice.

“You just encountered an oops,” I said to him.  “I think you’re really going to like how it turns out.”

At the following session I put their dried batiks on the wall and asked who experienced a beautiful oops. Almost everyone could point to something as an oops and tell what they had done or not done about it.  And as they moved on into another hour involving painting on fabric, I heard several say, “oops!”  And one of them added, “but I will make it beautiful!”

daughter, sister, wife, mom, early childhood specialist, creator of poems, photos and sweaters END_OF_DOCUMENT_TOKEN_TO_BE_REPLACED
This entry was posted on Tuesday, May 3rd, 2016 at 7:57 pm and tagged with #BeautifulOops, art and posted in lens as ink, May-be, teaching. You can follow any responses to this entry through the RSS 2.0 feed.
« 5/2 May-be
5/4 May-be »

thank you for reading, comment or email to wakeupandwrite@gmail.com Cancel reply